Walking Lighter on the Earth With Doug Part 3: Energy Conservation

What is The World’s Largest Source of Pure, Clean Energy?

No, it’s not the sun, although that is the ultimate source of all energy on our planet. What I am talking about is a vast source of energy that can be mined without digging in the ground or installing renewable energy.

You guessed it, it’s simple energy conservation, and there is fruit lying on the ground literally all around us. It’s a huge source of energy that’s available for the taking…or should we say NOT for the taking. And…it accounts for a majority of all energy produced.  Just how much?  Let’s look at the numbers.

How Much Energy Do We Waste in the US?

In a prior post on striving for zero waste in our food sector, I talked about the fact that 30 – 40% of our food that is grown, processed and served in the United States goes into the garbage.  It’s the same with the energy we produce. In it’s 2018 article on energy waste in the US, the World Economic Forum showed data that suggests the number is more like 68%. Meaning that two-thirds of the energy we produce results in“rejected energy,” or simply – energy that is wasted.

As you can imagine there are so many places to find inefficiencies in how energy is utilized. Some are obvious and others not-so-obvious, but I thought I would share my experience with how we were wasting LOTS of energy at our Meadowlark offices.

Tracking the Sources of Wasted Energy at Meadowlark

In my last post on how to save calories and kilowatts, I mentioned that we were pretty proud of ourselves for installing 18kW of solar capacity on our building, a pretty good sized system. We couldn’t wait to see how our energy bills would change as a result. Needless to say we were pretty disappointed when the bills started coming in and the reduction was not as we had hoped. We knew something was not right and that led us to install the energy monitoring system – TED, to help identify where our energy was being used.

What did we find? Plenty, actually.

We first looked at the obvious sources for inefficiencies – like our HVAC systems. We have an air-source heat pump that heats our schoolhouse and our design center.  A service technician found that the refrigerant was not at the proper pressure and therefore the backup heat was coming on too frequently. Could that have been the culprit? Likely it played a part, but given the large amount of energy we are talking about, not the whole thing.

Next, we found that a Windows server we have, an artifact from a program we used to run, was an energy hog. We’re a Mac shop, but not every business program is made for Mac. Nonetheless, this server does nothing but hold backup copies of archived records in a program we no longer use. Not only was this darn server responsible for about 80 dB of noise pollution and taking up too much space, it was also eating energy. Our newer Mac servers are silent and sip energy. Again, this was a part of the energy waste, but there was still something that was out of line in our energy usage. So we continued to look.

Luckily the TED devices helped and eventually pointed us to our well. When we started paying attention we found that our well never stops running. We had no idea that was happening because the well pump is housed in a concrete room that is adjacent to the basement of our 1874 One-room Schoolhouse. Unless you crawl in there, you would never hear it. The pump is decades old and the tube that brings water out of the ground was corroded and leaking water at the top. The pump was never satisfied because the water kept falling back down into the well. How much was that worth? A lot! It was nearly half of our total solar energy production…and we had no idea!

That makes me wonder how many millions of wells out there in America have the same problem, wasting about seven THOUSAND kilowatt-hours every year. We’re talking waste that’s at the scale of what an entire power plant can produce!

Taking Energy Conservation to the Next Level

We had to dig a new well and thus we took the opportunity to dig geothermal wells while the equipment was on site. This also helped to reduce our energy usage, and now in the shoulder months we actually see our solar production exceeding our usage. Now that’s a GREAT feeling! 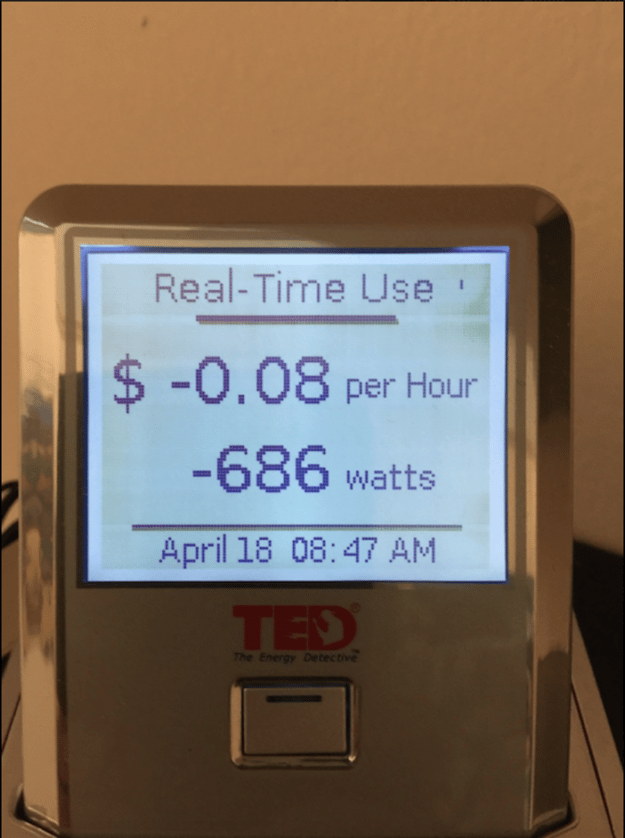 Other areas for energy conservation that we are looking at are sources with known ghost voltages for office equipment. We’ve quantified the total as being aberrant, but now we have to hunt for the culprits within individual circuits. Which means going to a level even more granular than a TED. You can get individual energy monitors for power outlets cheaply and easily. With these, we can go circuit to circuit and sleuth out the vampire loads. Power strips can then be used to power down circuits at night and at least save energy in the 14 hours of each day when no one is using the devices. We will likely find other items along the way. Almost all of our lighting is LED, so there’s not much savings available there, but en masse these all add up.

Walking lighter on the earth can actually be pretty easy…just look around you and find the places where you can waste less energy in your home. It can be as simple as changing your light bulbs to LED’s. Or if you need to replace an appliance, why not look for the most energy-efficient model? Here’s a great article by Environment America that will give you ideas on where to start wasting less energy in your home.

If you are needing to make major changes, then there are many ways to incorporate resource-efficient building materials and methods that will not only save energy, but will also make your home healthier and more comfortable to live in.

Ready to take the next step to walk lighter on the planet and waste less energy? We can help and would love to start the conversation.