Drive by Meadowlark’s offices at 3250 West Liberty Road, and you can see the exterior renovation of the former Arabelle Wagner School, a classic Michigan one-room schoolhouse built in 1874. The building now houses Meadowlark’s operations, fifty-five years after being closed as a school.

The school first opened its doors in an era when Germans and other Europeans were settling Washtenaw County at a rapid clip. Stone inclusions are still visible in some of the original bricks—pieces of earth that were pulled from the ground with hand implements. Refined and then pressed into forms, the clay bricks were hand cut and left to dry before being fired in charcoal-fueled kilns. The thousands of individual bricks made by hand for the triple-thick walls are a testament to how much the original German settlers valued education. The walls in those early days were plastered on the inside, but the exposed brick today shows every bit of the hand-workmanship it took to build these walls.

There is also ample evidence of the many feet that have crossed the threshold into Wagner School, which was also known as the Liberty Road School. Over the years, the school evolved. In the 1950s, a flat roof structure was added for grades 4–6 and connected to the original schoolhouse where grades 1–3 were taught. Kindergarten was held in the basement of the original schoolhouse.

Many local Ann Arborites recall going to Wagner School in the 1950s and receiving an outstanding elementary education from excellent teachers. Arabelle Wagner School closed in 1961 when Lakewood Elementary opened nearby.

The large parcel of woods behind Wagner and Lakewood schools adjacent to the Lakewood subdivision remained intact, thanks to the conservation efforts of people who lived in the area in the 1960s. The Wagner School building and its 1.5 acre parcel were eventually sold as private property to Washtenaw Engineering. In the 1980s, as Washtenaw Engineering expanded their operations, Hobbes and Black designed a tasteful addition to the back of the building. Washtenaw Engineering ran their company at this location for over three decades, until 2009.

In 2011, Meadowlark Builders purchased the school building. Time and vacancy had not been kind to the Wagner School. Although the building was well-constructed, its finishes were old and in disrepair, and a flood had ruined the basement level. The historic structure was in dire need of attention and a good fit for Meadowlark’s mission of creating sustainable, beautiful buildings that enhance the environment. 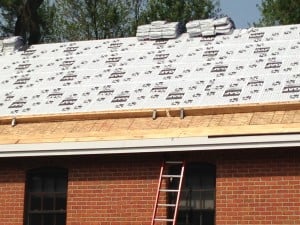 Meadowlark applied for a Michigan Saves® loan, a low-interest loan for homes and commercial buildings that can be used for new roofs, insulation, High Performance HVAC, (including Geothermal), windows, doors, and other energy-related building improvements. Through Michigan Saves®, Meadowlark was able to rebuild the roof, which was failing in some parts due to long-term leakage, and replace it with a super-insulated roof structure.

In addition, all of the exterior trim and gutters were replaced. Our location also became the first field installation in the world for DOW POWERHOUSE solar shingles, the next generation of a long-lasting architectural product that produces electricity. We added electric car chargers, along with 18kW of solar photovoltaics—about half of what will be needed to meet our goal of becoming energy neutral by 2026. Meadowlark also plans to restore the outdoor site by returning it to native prairie in front and deciduous forest behind and to eventually connect it to the Lakewood Natural Area. 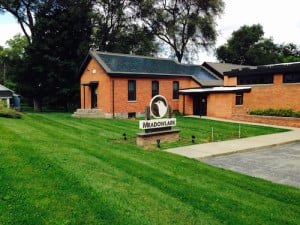 For nearly ninety years, the Arabelle Wagner School was a hub of learning at the western edge of Ann Arbor. While it can be hard to imagine the life of a farmer in the early days of the settlement of Washtenaw County, historically speaking that time has passed in the blink of an eye. Beyond the current occupants, a structure that is built for the ages, through good design and craftsmanship, can become an asset for the entire community. Great buildings like the Wagner School serve not only as shelter, but also as a touchstone for future generations.