Saving the Earth – One Building at a Time

You may not realize it, but according to the U.S. Energy Information Administration residential and commercial buildings take up about 40% of the total energy consumption in the U.S. Thus making buildings more resource efficient is a pretty good target for walking lighter on the earth. Our co-founder, Doug Selby, has been busy doing just that…saving the earth through the built environment. His passion for sustainability has always been a core value at Meadowlark, but with his latest project – he will take this passion to a new level.

This new project is being designed with the goal of being the world’s (yes, that’s right – the WORLD!) first multi-family residence to seek Living Building Challenge and Passive House certifications. This project will take an existing structure in one of the oldest neighborhoods in Ann Arbor and rebuild it. The home, originally built in the 1860’s in the Kerrytown area, came into its present form in 1929 when a house from across the street was moved and joined with the original home to make a boarding house. It has gone through many changes since then and little remains of the original building materials. This is what the residence currently looks like:

Doug’s mantra of “lose less, use less, then produce” is the key to building more energy efficient homes and it certainly will be the underlying theme for the design and construction of this new building. However, the key component in getting to net zero is the “lose less” component of that mantra.

To make this home net-zero there will be lots of technology involved, but the thermal envelope (the interface between interior and exterior from the bottom of the foundation to the peak of the roof) is what will make it all work. “If we get the building envelope right, everything flows from there,” notes Doug. “That is the reason to build a passive envelope. It’s the most efficient home you can make while still keeping economics in mind, and it’s the biggest contributor to a net-zero house,” Selby adds.

Once the “lose less” component has been addressed then we have think about everything else that uses energy in the home. This is the “use less” component and it can take on many forms in a resource-efficient home. First of all, find appliances that are the most efficient for what they need to do. A house that is truly ready to be carbon-neutral means going all-electric, and we are not just talking about energy efficiency here. Using electrical appliances for all the things that use natural gas is also better for the air quality in your home.

Finally the “then produce” part. What does that mean? It is renewable energy and in most cases, that means solar. It is worth noting that if the energy you buy from a utility is made with renewable sources, at this point you’re carbon neutral. Your home might not be net-zero, but as our utilities increasingly move to renewables based on economics (it is the cheapest energy out there), it makes it easier for our buildings to be carbon neutral. 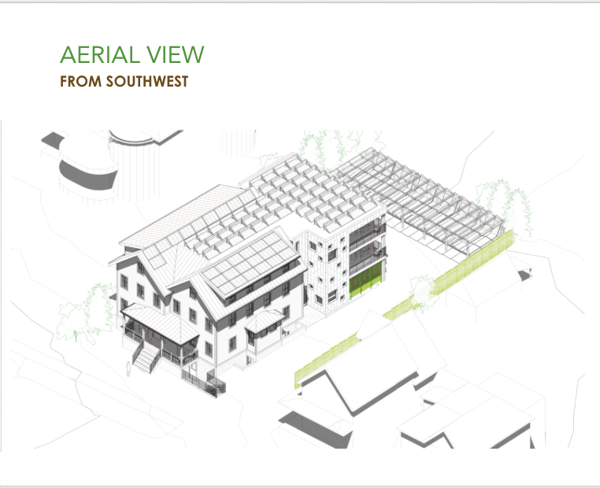 Doug and our other co-founder Kirk Brandon, wanted to bring the idea of sustainability into home building and be evangelists for low carbon-footprint living. They also wanted to build beautiful things that everyone at Meadowlark could be proud of. The name of the company came from the idea that understanding the various bird languages is important for survival if you’re living close to the earth. Ground-dwelling birds like the Eastern Meadowlark are particularly suited to awareness of their surroundings and are sensitive to disturbances in the ecosystem. Besides having a beautiful song, they also play an important role in the ecology the places they inhabit. The universal bird language is a code of sorts, for the things all living creatures, including humans, need for true sustenance. This latest project will be a testament to those values.

If you would like to learn more about this project please watch this webinar provided by Brett Little at the Green Home Institute.