Meadowlark has been selected to restore the Michigan Solar House (MiSo) as well as relocate it to a permanent residence for its new owners, Lisa and Matt Gunneson, who recently bought the iconic home. The home will be moved to the Gunneson's property in Evart, Michigan.

MiSo is an innovative 660-square foot solar-powered home collaboratively designed and built by an interdisciplinary team of architecture students and faculty from the Taubman College of Architecture and Urban Planning at the University of Michigan for the 2005 Solar Decathlon in Washington, DC.

The goal was to create a prototype capable of being mass-produced and customized. Employing passive energy methods with the aim of net zero-energy consumption, the structure is fed by solar power and heating. Conceptually, like an automobile, MiSo was envisioned as a residential module that could be universal, autonomous, and easily transported around the globe.

During the past decade, the house has been used as an exhibit at the Matthaei Botanical Gardens in Ann Arbor. It went to auction in October 2016, with the Gunnesons placed the winning bid. 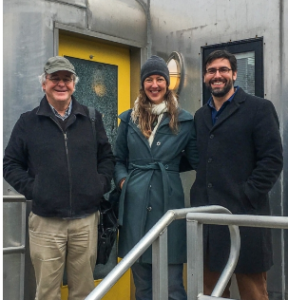 Following the MiSo's move to Evart, the Meadowlark team worked to restore the home with the goal of creating a net-zero environment.

"This is a one-of-a-kind home, and our expertise in sustainable construction will help ensure the Gunnesons transport and restore the home exactly to their specifications," said Doug Selby, CEO. "It's also a labor of love, as two of our staff members, Jen Hinesman and Melissa Kennedy, were part of the University of Michigan team that created the MiSo back in in 2005."