Keep an Open Mind About an Open Basement Ceiling

The basement is an underutilized space in most homes. We Michiganders are even known for our dark, cramped, unfinished basements that are only used for storage, if anything. But just think of all that untapped potential sitting down there next to the Easy-Bake Oven you haven’t seen or used in 30 years! There’s so much beautiful living space you’re missing out on.

Transforming your basement into a finished lower level (as we designers like to call it) is a process, but one that’s well worth it. As your trusty design-build experts, we’re here to give you some ideas on how to make the most out of your basement remodel — starting from the top down with a discussion on closed vs. open basement ceilings.

What Is an Open Basement Ceiling?

Also referred to as an exposed basement ceiling, an open basement ceiling leaves the structural and mechanical components of the ceiling uncovered. Things like trusses, beams, joists, ductwork, piping, and more are not enclosed with a drop ceiling.

Can a Finished Basement Have an Exposed Ceiling?

Many homeowners find that an exposed basement ceiling provides more of an industrial look. Depending on which color you choose to paint with and what other design and decorative features you choose to implement, you could either take advantage of that industrial look or take your space in an entirely different direction.

4 Benefits of an Open Basement Ceiling

So what’s the draw here? An open basement ceiling can simplify your remodeling process and bring other benefits to your home’s design and maintenance.

We should also make it clear that we’re not advocating for an open basement ceiling over a traditional one. Rather, we’re offering another design possibility for you to consider.

One of the limiting factors in tackling a basement remodel is short ceiling height. In some homes, a person of average height can just barely walk upright without banging their head above.

Adding a layer of drywall or a drop/suspended ceiling system could bring that ceiling down much further — and, chances are, that ceiling won’t be totally flat. There will most likely be drops to accommodate ductwork or piping that doesn’t fit snugly between the floor joists.

In cases like these, an open basement ceiling is the best — if not the only — way to go.

Installing a drop ceiling or drywall ceiling to cover the components within can consume a bit of your renovation timeline. If you’re trying to cut down on time (and costs, for that matter!), then leaving your basement ceiling exposed is a surefire way to do so. 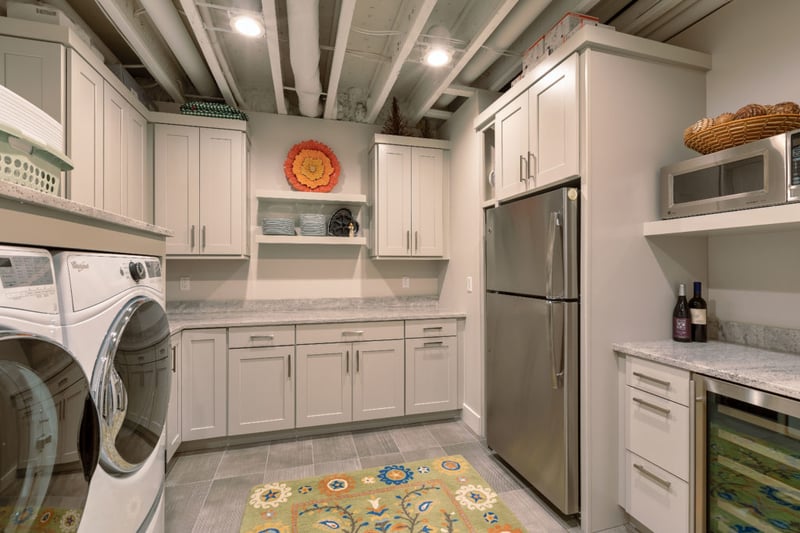 The only thing that may take some time is painting the exposed components within the ceiling (more on that later). But even then, that paintwork would likely only take a few hours instead of days or weeks.

Drywalled ceilings may conceal not-so-pretty pipes and such, but there’s a downside to that in terms of functionality and accessibility. The coverage makes accessing the inside difficult, requiring drywall removal and replacement if something goes wrong with your plumbing, electrical, or HVAC systems embedded therein.

In addition — most HVAC ducting systems have dampers on them which many of our clients utilize to maximize their heating and cooling systems efficiency as the seasons change. A drywall ceiling will prohibit access to those dampers.

If you choose to leave the ceiling open, you won’t run into this issue. As maintenance and service needs arise, you’ll always have easy access.

If you’re looking for ways to brighten your basement up, keeping the ceiling exposed is a great option. As we mentioned above, you’d simply have more overhead space where you can place lighting fixtures. Plus, if you paint all the internal ceiling components a lighter color like white or beige, the light will reflect better underneath it.

What’s the Best Color for an Open Basement Ceiling?

Speaking of paint colors, you may be wondering what the best option is for your open basement ceiling. While our answer is always “whatever speaks most to you,” many homeowners stick to a classic black or off-white.

At Meadowlark, we’re pretty much split on the black vs. white open basement ceiling dilemma. They both look great, but they also both have their pros and cons.

Black paint gets good coverage and sort of makes everything disappear. The unflattering bends and bumps fade away into the darkness. A recent basement remodel client noted that the black paint ceiling treatment makes the ceiling In the basement "go away."

However, this is a common concern: Will the dark color make it feel like a dark mass is caving in on my family, burying them alive? And to that our answer is no. We’ve done several black open ceilings, and our clients have been pleased. Pairing them with light walls offers great contrast and makes the ceiling feel like it’s floating, thus avoiding the whole “buried alive” scenario.

Check out this photo of a basement we remodeled with a black open ceiling. The paint color is Peppercorn by Sherwin Williams. 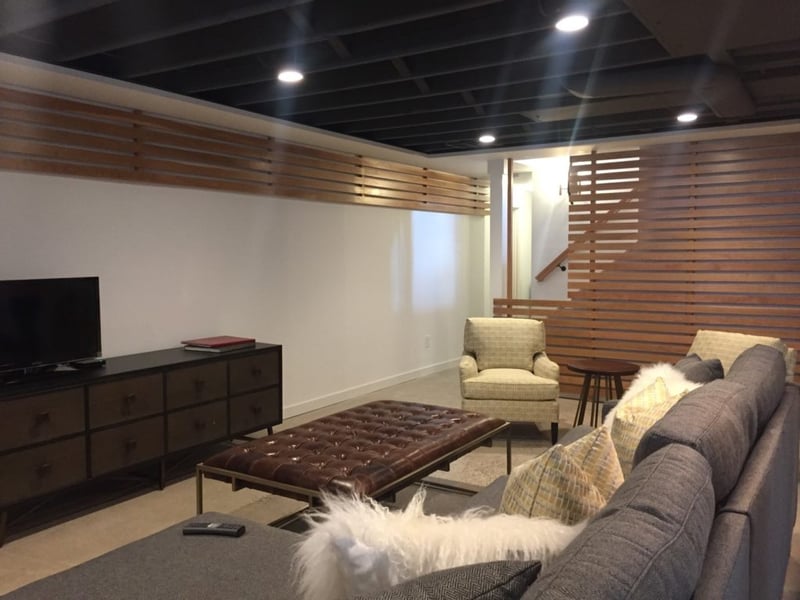 When you choose a white (or light color) open ceiling, you have to buy into the imperfections. The sappy knot in the wood joist is going to show through, and you have to embrace it.

However, as we mentioned above, white paint can help tremendously with lighting. They help bounce artificial light around, making the space feel brighter even when there’s not a ton of natural light to grasp underground.

Check out this photo of a basement we remodeled with a light open ceiling. 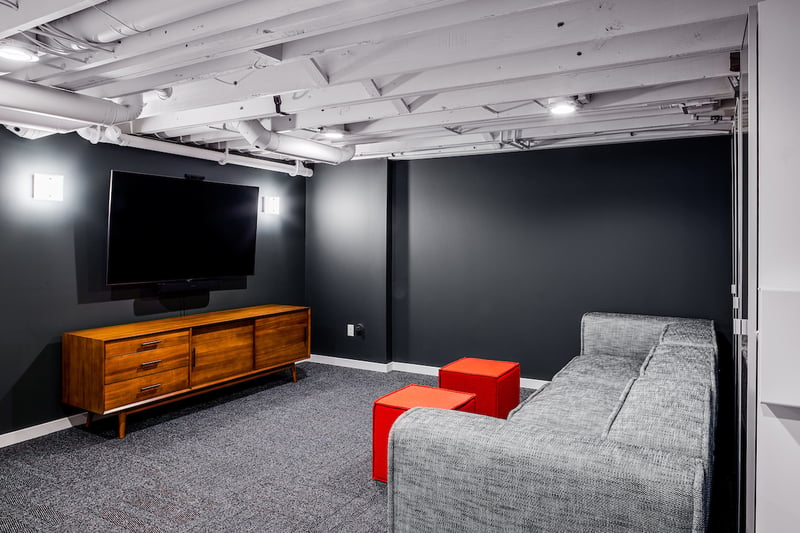 You can’t go wrong with an open ceiling. It’s practical, cost-effective, and painting your ceiling one uniform color can really make it blend in with the rest of the space. But at Meadowlark, we like drop and drywall ceilings too. We’re happy to implement whatever works best for your home, goals, and budget.

If you’re ready to get started on your basement remodel, contact our team. We’re so excited to chat with you and help you achieve an incredible transformation!