Construction on this Meadowlark house includes a different type of exterior wall, roof and foundation construction — or thermal envelope. Why? Because this home is being built to meet the Passive House standard.

What Is a Passive House? 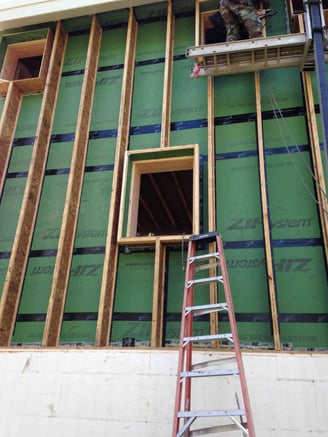 This video on Passive Houses is a great starting point, but the bottom line is what Meadowlark’s Doug Selby has said hundreds of times: Lose less and use less, and then, if you can, produce.

You can follow the Passive House model by making a significant thermal envelope around your house, preventing thermal bridges, sealing it from air leakage, orienting it to take maximum advantage of sunlight, and ventilating it properly for healthy air quality.

What’s with the Framing Techniques in the Wall? 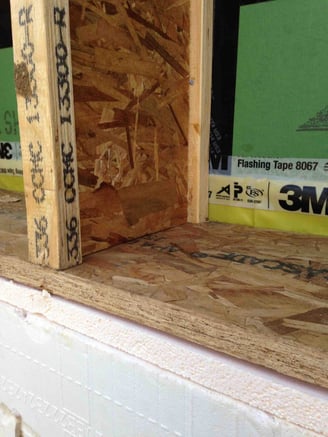 The framing techniques featured in these photographs are what create the significant thermal envelope around the home. In this case, you have normal stick framing (2 x 6) on the inside and a special sheathing that is moisture preventative and blocks airflow. The next step is structural I-joists used vertically that allow for lots and lots of insulation to be added to walls. After that, add fiberboard sheathing, followed by some sort of house wrap, and finally furring strips and exterior cladding.

It’s a lot of structure, but the end result is a home that uses about one tenth of the energy than a home built following current building standards.

What Are the Other Components of a Passive House?

There are many, many factors that are considered in the design and construction of a passive house. Insulation, thermal mass, solar site orientation, ventilation, and the number of family members living therein and their habits/preferences—all of these elements work alongside one another and should be looked at holistically in order to achieve the best end result.

For more detailed information on Passive House technology read Doug’s Post and contact us if you have questions. We’d love to start a conversation.