1920s Colonial Gets a Refresh

The homeowners came back to Meadowlark for second large project after having remodeled their detached two-car garage with an addition of living space above a few year prior.

Their Ann Arbor 1921 center-hall colonial-style home had good bones and thoughtfulness from those that built homes in that era. While some remodeling had been done in the past by prior owners, the house needed to become more functional for the family.

One of the most important considerations for the addition was for the design to blend architecturally with the original structure. By working with the Meadowlark, their home addition looks as if it has always belonged.

The homeowners did not want any "can" lighting and preferred light fixtures that fit with the period style of the home.

For the kitchen, the homeowners wanted space that could comfortably accommodate two cooks without getting in each other's way. More counter space was needed as they like to can and freeze, and prepare bread and pastries, all which require space.

Additional storage was also key — especially for the various pots and pans — and they settled on hanging racks over the kitchen island. They liked the style of the original cabinetry and used custom built Meadowlark cabinets. Meadowlark also considered the location and storage of various small kitchen appliances, like their often used KitchenAid mixer, and created a  convenient place for it to be stored that is easy to reach when it's time to use and super easy to put away.

It was important to the homeowners (and to Meadowlark) to salvage and reuse the featured original millwork rather than replacing with new.

All in all, Meadowlark helped the homeowners realize their vision of updating the layout and adding space without loosing the integrity of the house’s authentic 1920s feel.

To bring the home up-to-date while respecting its original character from the 1920s. 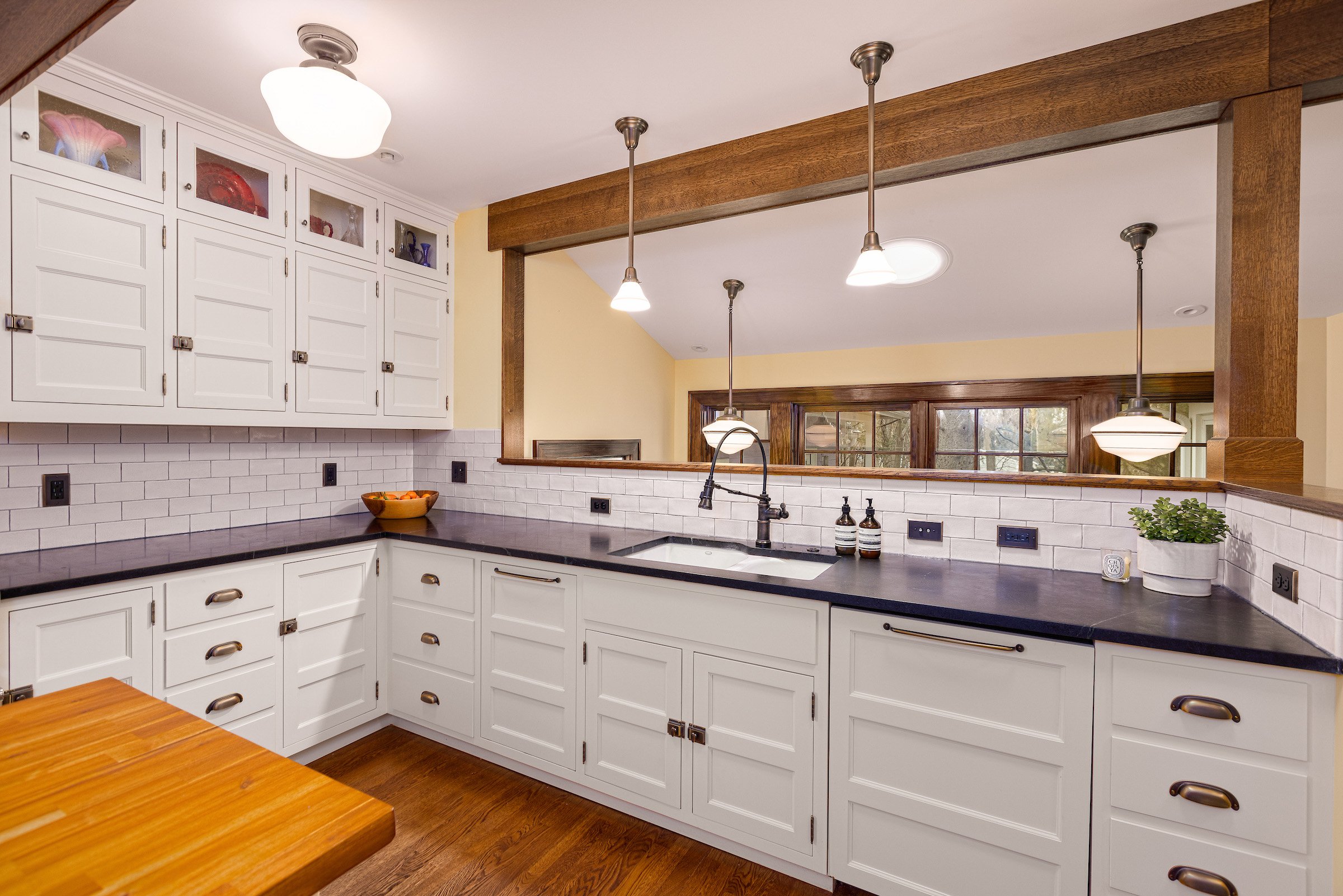 The overall scope of this project required a hefty, multi-floor remodel and addition including expanding the basement. The result of the collaboration between the homeowners and Meadowlark is that the family now enjoys a home that is tailored to their casual lifestyle yet the home retains its original period style.

Meadowlark completed a head-to-toe renovation of the kitchen, and at the back of the home added a mudroom that flows into a bar space off the kitchen, a first-floor bathroom, a 3-seasons room, and converted an older screened porch into a "music" room which can be converted into a bedroom in the future.

In the kitchen, lots of cabinetry was added with a paneled fridge and freezer. The counter space with the sink runs seamlessly across what was the former back of the house. This resulted in a wonderfully unobstructed view of their backyard. Meadowlark approached the design of the center island to be more of a furniture piece rather than a traditional island made of cabinetry.

The new mudroom was needed as a landing space for entry from the rear/side of the home which is conveniently located near to the detached two car garage. A bench to sit and storage for shoes was built to become a practical place to drop gear or groceries when entering the home and to keep the family organized. A tile floor was used rather than wood for easy-maintenance taking into account the damp and snowy-winter Michigan weather.  The addition of tongue and groove paneling that continues through this space helps connect it to the rest of the house aesthetically while adding character, depth, and a sense of craftsmanship.

The large 3-season room was added as a great way to be “outside” but not be eaten by nature and tons of mosquitos. It also created a connection to the large backyard and patio area.

Many original lighting fixtures were found via eBay or online vintage shops to duplicate ones already in the home or from that period.

All new appliances were incorporated and a water carbonator for on-demand sparkling water was installed in the new bar area in the addition at the back of the home.

The existing screened porch was converted into conditioned space and now is a music room for the homeowners. A first floor bathroom did not exist so one was added to the back of this room which is adjacent to mudroom and bar area being a convenient location easily accessed on the ground floor.  In the future, this could become a primary bedroom suite should the homeowners choose to age in place

The original wood staircase was refinished and anaglypta wallpaper that was common in houses built during this period was added after repairing and remediating cracks in the plaster walls.

Custom closets, cabinets, and shelving were added the in the primary bedroom dormer space.

No large countertops were desired in the bathroom upstairs so a Kohler sink was used. The original clawfoot tub was retained but a separate shower was added.

The lower level of the house was evaluated from structural adequacy and a number of rooms (an office, laundry room, and playroom — not pictured) were added with egress windows providing natural light and safety.  Storage was created for canned goods and items purchased in bulk.

One of the favorite elements of the house was the original vintage crystal purple doorknob featured in the downstairs bathroom. 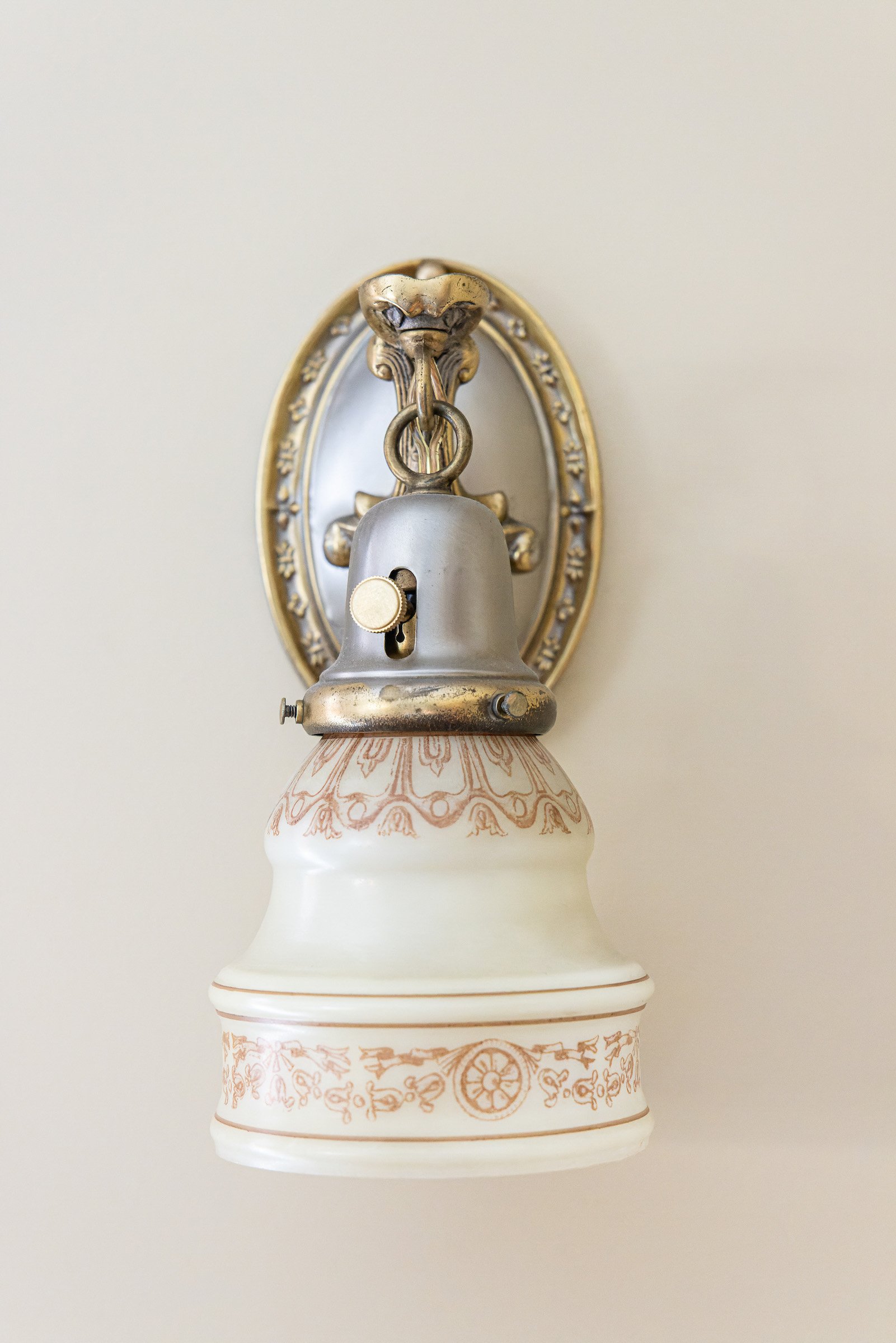 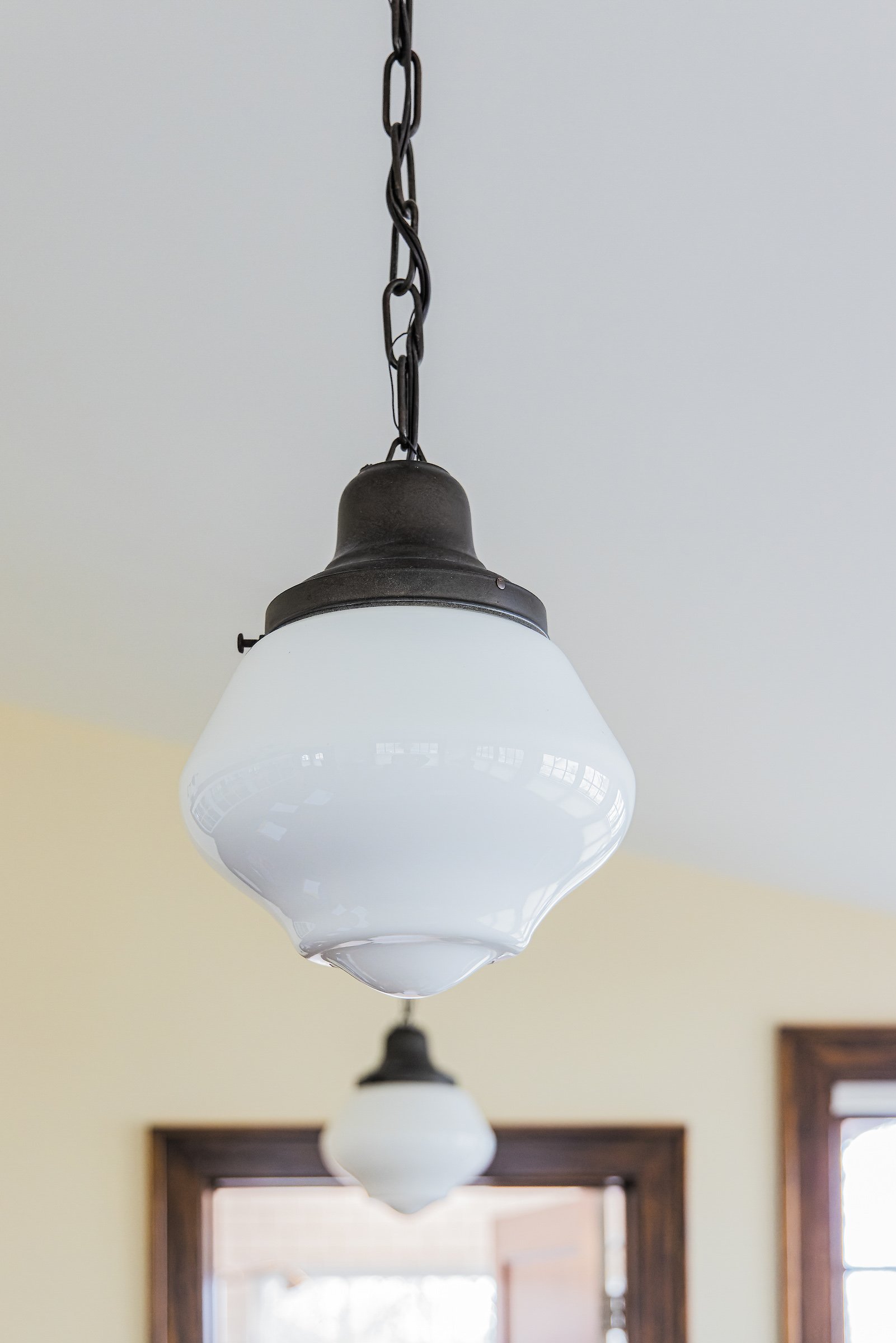 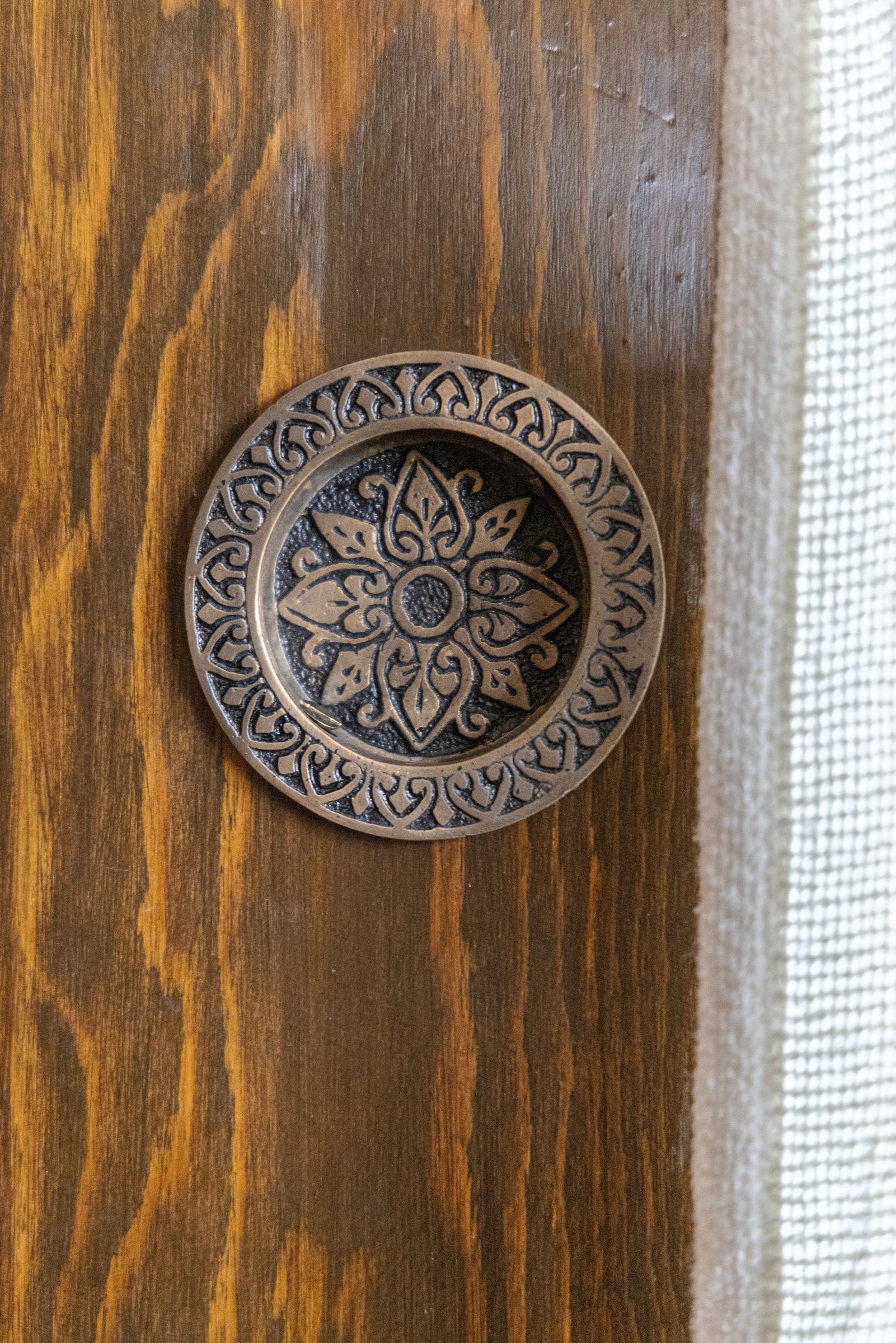